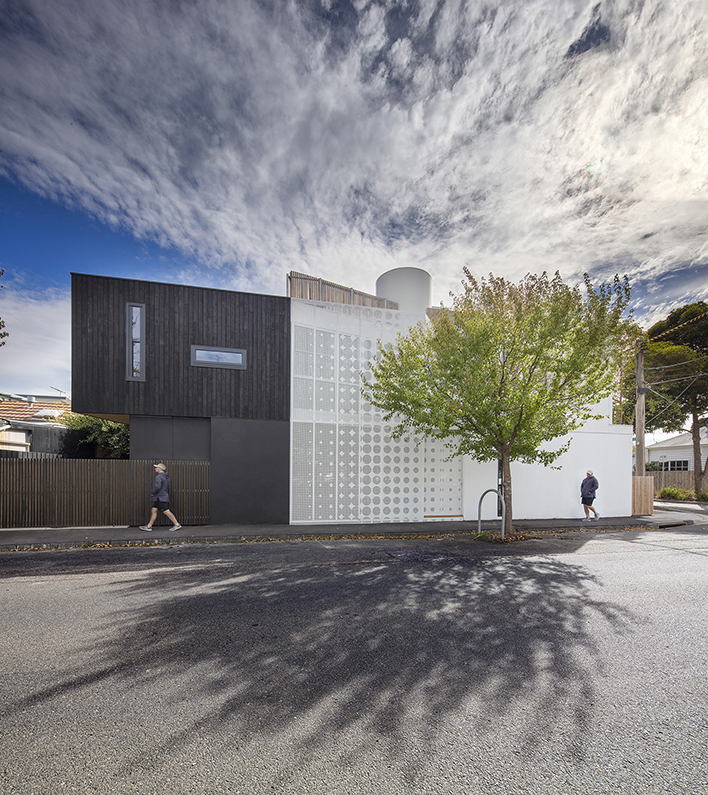 The Judo House was designed for a couple and their young family. Both clients are Judo enthusiasts, the wife being a former Olympic Judo competitor. Besides the usual requirements of a family house they wanted a space where they could teach the children Judo. Therefore, the basement became a multiuse space with martial arts as its core activity. Circular floor windows on the ground floor allow light and views to the Judo practice below.

We used the concept of the screen, with its long architectural history, as well as its modern manifestations in everyday life, as a generator of architectural space and surface for this small inner-city site. Besides the size of the site there were also multiple town planning restrictions to negotiate.

As the site is a narrow 6m wide, triangular slices were cut into the ground (with traversable mesh over) to allow light into the basement. This allows for a Zen-like atmosphere for the underground Judo practice. On the ground floor a triangular light court is cut out of the rectangular cube on the side wall facing the street. It is secured by a perforated metal screen. The screen allows privacy during the daytime with dynamic views out to the street. The perforated patterns frame the street view with a dot-screen like surface filter, vaguely reminiscent of the static of a television screen. At night when the interior lights up to the street, the half-tone dot-screen mediates the image.

Due to the narrow inner-city site, the maximizing of space and the illusion of space was of utmost importance. In the main space, circular graphics in the concrete floor and plywood ceiling create spatial zones without walls which interact with the natural perspective of the space. The dark black circular wall seat, which also acts as a cubby for young children, pushes the space sideways into the boundary.

On the first floor to the north is another perforated metal screen which shades and gives privacy to the master bedroom. It has a perforated black hole blurring which slides to reveal a perfect view or a filtered view depending on the client’s mood. A roof garden provides city views.

The Judo House - Sustainability Statement
The clients were proactive in supporting the development of a sustainable house. The project was used as an experiment to find and combine as many sustainable and passive solutions as possible and the best way for these to be combined. Solar panels occupy as much roof space as possible and are oriented for maximum demand efficiency. Initially ground source geo-thermal was planned but was soon replaced by air to water heat pumps as it was considered more appropriate to Melbourne’s climatic conditions. The heat pumps heat the hydronic concrete floor slabs as well as heating and cooling the rooms through wall mounted units. Traditional air conditioning was eliminated due to its negative effects on the environment, as was gas. The spiral stair provides a stack-effect in summer to vent hot air and draw cooler air from the basement. The house uses conventional bulk insulation, as well as an external layer of polyisocyanate insulation, which has the lowest embodied emissions of rigid board systems. It prevents thermal bridging through the structural steel frame of the building. Using a comprehensive and rigorously installed external membrane, as well as custom developed door hardware and detailing, the building achieved an excellent air tightness rating of 3.7 ACH (an improvement on the average of 14). We used fly-ash concrete to minimise the embodied energy usually associated with the production of cement. The thermal mass was carefully considered to minimise energy use. The tree to the north is used for natural sun-shading downstairs and upstairs to the bedroom, which also has a sliding screen for extra sun-shading and privacy.