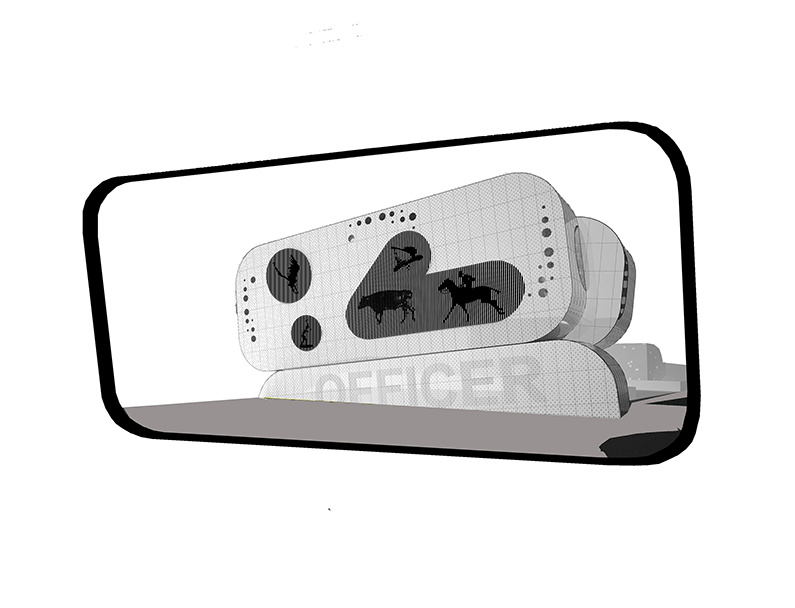 The ECB (Energy Centre Building) project is a master plan for a city block in a new outer suburban development with offices, shops and plazas centred around a tri-generation building. The Trigeneration building is situated next to the Officer train station. The project explored the architecture of green district energy in a city centre.

The ECB buildings are conceived of as a series of screen-like forms that have ‘fallen from the sky’ like asteroids or space-junk, landed by the train tracks. Each ‘screen’ has within it a few mini screens which each have vertically sliced images of Eadweard Muybridge sequence photos, which optically animate as one travels past in the train.

The design process was influenced by the information that the area had been showered by asteroids many hundreds of years before. These asteroids and the place had become important to the local aborigines. The asteroids are now scattered in various museums around the world. The idea of the building infused by the structure of vision and the screen, as well as the animated Muybridge images of the cowboy and cow beside the train tracks seemed an appropriate way to discuss the use of the image in the modern city. The train in the Lumiere’s ‘Arrival of a Train at La Ciotat’ (1895) was a central image and scene to the birth of the cinema. The cluster of buildings form a dialogue concerning nature and asteroids, the birth of the cinema and the modern image (and the impact it has had on the city) and the introduction of green district energy.